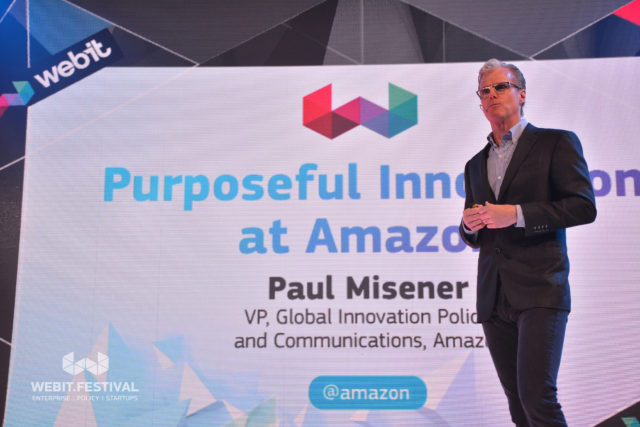 The ability of offering long-term innovation to the customers is the main factor, that is dividing the companies of the 20th century from the ones that are emerging with the development of the Fourth Industrial Revolution.

Right now we are living in a world that is changing so fast, that even the biggest players of the corporate world are having a hard time catching up with the trends. But there are some that follow, and some that are setting the tone, both for customers and enterprises.

Certainly one of the best examples in this regard is Amazon – the fourth highest valued company in the world that has notorious obsession with its customers. At this year’s Webit.Festival Europe we had the chance to listen to the company’s Vice President for Global Innovation Policy and Communication Paul Misener.

The famous expert spoke about the 3 leading innovation principles in Amazon – the Customer obsession, Long-term thinking and Passion for Invention.

He gave the Bulgarian-American scientist John Atanasoff as an example of 20th century inventor, who managed to create the world’s first digital electronic computer. On the contrary he pointed out a 24 pages long research paper, published by CERN couple of years ago, that had over 5000 co-authors.

“Somewhere in the past century we have gone from the lone innovator all the way to 5000 working on a particular innovation”, Misener said.

According to him one of the reasons for Amazon’s success is the ability to foster innovation with “Two-pizza teams”. The concept is that any new innovation or problem that needs to be solved should be solved using a group of individuals that can be fed comfortably with two large pizzas. It means that there is a number of people between 4 and 12 who can effectively work together as an innovation team. With larger teams it turns out that there are difficulties with communication between team members. With smaller it turns out that you are not getting enough talent in the mix.

The idea here is clear, you want enough individuals to make a difference but at the same time you don’t want too many, because the communication between them becomes impossible.

Paul Misener said that within the context of innovation Amazon uses the Working backwards doctrine. When the company has a plan to have a new product or service, the team sets time to see it on the market and starts looking backwards to the present day to figure out what it needs to do to get to that point.

The second guiding principle is the ability to Engage in long-term thinking. This process ignores the short-term hurdles, but it also speaks to a willingness to be misunderstood by others who may not share the long-term vision.

As examples for that Mr. Misener showed the audience several Amazon project that have failed the expectations and were shut down. But there are more than one successful initiative, like the idea to let third-party sellers to market their products on the company’s website and introducing customer reviews to the products.

“When we first introduced this our investors and partners said that this is crazy, because we are trying to sell things and in the same time we are allowing customers to come to our territory and criticize the things we are selling. We have lost a lot of short-term sales because of this, but we have built a long-term trust in our company”, he said.

The third leading principle in Amazon is the Passion for invention and the notion of experimenting and being willing to fail in the process. The ability to take risks is a crucial part of innovation, because if you know what the outcome of your experiment is going to be, than it is not experimenting.

An actual experiment has to be able to fail. And to innovate and introduce new things to the customers, you have to be willing to try them out.

Soon you will be able to see Paul Misener’s full presentation on our YouTube channel.

If you want to keep up with the latest trend in the world of digital economy and technology, then Webit.Festival is the right place for you. Visit our website and book 2 of our Super Earlybird tickets for Webit.Festival Europe 2018 for just €100.