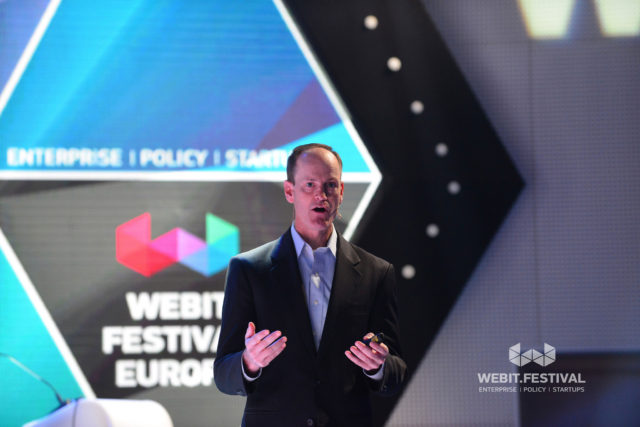 Eric Klinker, former CEO of Bittorent and now Chief Executive Officer of Resilio Inc, was again among the top speakers at Webit.Festival Europe 2017 in Sofia. Mr Klinker now heads Resilio, spin-off of Bittorent, aiming to empower the IT administrator with world leading technologies to handle the ever expanding demands of moving big data reliably and fast over any network to any number of endpoints.

Cloud computing is now a huge part of our personal lives as we use it for storing pictures, documents and other data. Huge companies also use it to store all of their data, but according to Klinker, and with the help of IoT, edge computing could soon overtake the cloud. Edge computing refers to data, being processed in the edge of a network instead of holding it in a cloud or a data warehouse. This reduces the communications bandwidth needed between sensors and the central datecentre and also, could eliminate a lot of security and privacy issues, because of its closeness to the edge of the data.

“I start with the notion that IT is really good at one thing – it reliably produces cheap metaphors and buzzwords to help explain the things that we have always been doing. So in this way putting a bunch of computers in a room, called a Data Center is suddenly the Cloud. And the Cloud is easily the most successful IT buzzword we have ever seen. It is pure marketing genius”, Mr Klinker said at the beginning of his speech.

But he believes the pendulum is swinging.

“While Mobile very much lives at the edge of the network, the processing power of the average early mobile device was so low, that it had to be combined with Cloud Computing to be useful. So all the processing of the web apps lives in the Cloud and in reality mobile computing is really a centralized computing exercise. But again, I think we can see the pendulum swinging. We can see IoT coming and we can see a world, where edge computing may finally come to life. And we will probably have more computing power and more computers on the edge of the network than we will have in data centers”, the CEO of Resilio predicted.

Mr Klinker explained that world of computing is driven by Moore’s law, which says that computers are going to get cheaper and more powerful and that they are going to do it exponentially over time. That means that there is going to be a lot more computers at the edge. But it also means that they will consume much more data than they could before and that is going to create much more data. And here edge computing can help.

“A data by itself is not useful if you can’t network it to other computers to do useful things with it. The network is more like infrastructure. It is built with tools called back codes. They don’t obey Moore’s Law, they don’t double in productivity every 18 months. So what you are going to see in the next years is the diverging gap between the amount of data we can generate at the edge of the network and the capacity of the network to deliver that data to the places we needed. And that stress will be felt very acutely in the Cloud.

Computing power is obviously going to grow on the edge. Other thing that drives challenges is the need to centralize all the computing in one place. We could put enough computers and data centers at great expense and effort for a while if we have the budget of Google to support computing trends like Mobile. But IoT will add two or three orders of magnitude more computers into the internet. Can we really continue to scale data centers like we do now?”, Mr Klinker asked.