Currently, the global infrastructure is expanding into Space. The truth is, this is something that has already started happening. The commercial activity in Space creates many opportunities for both investors and entrepreneurs. It is expected to exceed government activity by 2020.

At the 2017 edition of Webit.Festival Europe the Chairman of Space Angels Network Joe Landon talked about the entrepreneurial revolution in Space. Space Angels is a company which searches the world for the best space startups. It aims to create opportunities for the investors while enabling them to make profit from the commercial space industry.

No matter what the industry is, new technology is always considered crazy at first. The Space was once considered science fiction, now it is a science fact. To make the topic more tangible, Joe Landon shared a couple of examples of innovations in the Space industry with the audience at Webit.

The Falcon-9 Rocket was launched, landed and re-launched by SpaceX. Such reusable rockets spread the costs over the multiple launches and present a revolution in the Space industry. The Blue Origin – the space company of Jeff Bezos, the CEO of Amazon, had a similar success with its New Shepard suborbital rocket. It was launched and landed five times in a year.

There are innovations concerning 3D printing in Space. The company Made-in Space created a zero gravity 3D printer which enables the astronauts to print the exact tool they need in Space which lowers the costs. 3D Systems is a company which created the first manufactured object from asteroid material.

The European banking center created $227 million fund to invest in space mining projects. According to a research report on the opportunities in the commercial space economy by Goldman Sachs, the costs of asteroid mining are comparable to these in Earth mines. 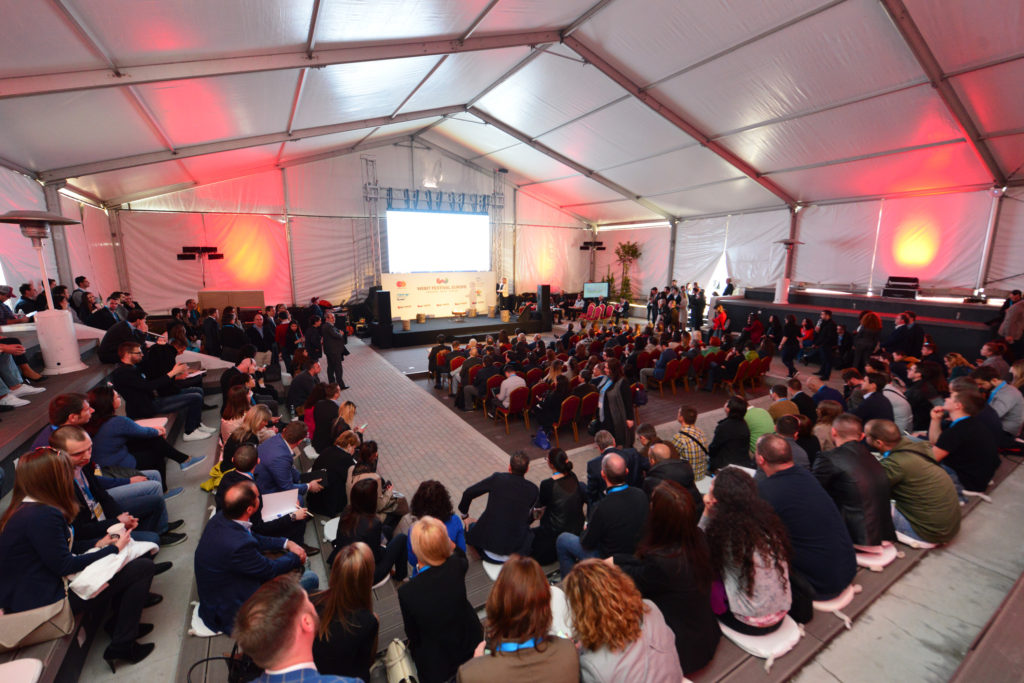 There are many forces which when acting together make Space innovations possible. Joe Landon stressed on the importance of the development in technology which reduces the costs of sending things to the Space. He emphasized on the role of the revolution in satellite technology.

Commercial communication satellites a couple of years back were very heavy and extremely expensive to make and launch. It was important for these satellites to last for 15 years and to be very reliable which required further financing.

The satellites from today can be held in a person’s hand and are far cheaper to produce and launch than their multi-million spacecraft predecessor. It is possible to launch dozens of them at the same time. This technology has a great impact on the space economy. Huge opportunities for investors and entrepreneurs arise.

He dispelled the myth that space companies need extremely big investments in comparison to other tech companies. In fact, the seeds and Series-A investment in space startups is identical to the rest of the tech market. The truth is that space companies from the past needed a lot of funding to build the expensive infrastructure which the space companies of today use. This advantage enables them to develop low-cost, quick businesses.

Another myth is that space companies take too long before making any actual profit. The numbers show that since 2009 $14 billion were accounted as exits in the Space industry.

“In the future we’d like to think there are millions of people living and working in the Space.”, Landon said.

We are not talking about sending only missions to the Space, but also forming communities. Astronauts will be joined by people with all kind of expertise such as teachers, lawyers and doctors. Today, very few people go to Space. According to Landon in one or two generations there will be people who have lived their entire life only in the Space.

This completely different perspective when the Earth is observed from the Space can change the way we think about it. As the Apollo 14 astronaut Edgar Mitchell said:

“You develop an instant global consciousness, a people orientation, an intense dissatisfaction with the state of the world, and a compulsion to do something about it.”

You can watch his full lecture here:

If you want to keep up with the latest trends in the world of digital economy and technology, then Webit.Festival is the right place for you. Visit our website and book 2 in 1 of our Super Earlybird tickets for Webit.Festival Europe 2018.

Feel the Webit vibe with some of the best photos from this year’s event!