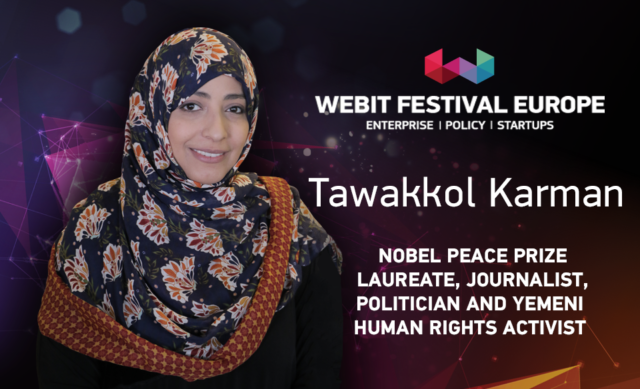 As today’s world keeps changing at an accelerating pace, one can only expect to see significant breakthroughs in the fields of digital and innovations that will hopefully change our live for the better.

Tawakkol Karman is a human rights activist, journalist and 2011 Nobel Peace Prize laureate. She was crowned the Mother of the Yemeni Revolution in recognition of her prominent role in advocating and leading the 2011 revolution. She was also named the Lady of the Arab Spring because of her attitudes against the authoritarian regimes and counter-revolutions in the Middle East. In 2005, Karman founded Women Journalists Without Chains (WJWC) to defend press freedom and to combat human rights violations.

She holds many positions and titles, most notably as follows:

1. Member of FAO-Nobel Laureates Alliance for Food Security and Peace
2. Member of the UN post-2015 High-Level Panel
3. Member of Transparency International’s Advisory Council
4. Member of Executive Board of Nobel Women’s Initiative
5. Member of the Advisory Board of the World Education Organization

This will be her first time visiting Sofia and she shared her expectations of the city and Webit:

“I am so thrilled to have a chance to visit Sofia that combines beauty and deep-rootedness.
For the festival, I expect it will be successful. The world everyday witnesses new ideas and innovations, and the digital world does not seem to stop at a certain point.
As today’s world keeps changing at an accelerating pace, one can only expect to see significant breakthroughs in the fields of digital and innovations that will hopefully change our live for the better and show how to make the most of technology. Despite all the drawbacks, technology has made our lives easier and allowed us to accomplish our projects as fast as possible and at the lowest possible cost.”

Tawakkol Karman was one of the first voices calling for the departure of Saleh’s dictatorial regime, and she had always been firmly convinced of the need to achieve this goal as clearly expressed in her different articles during the pre-2011 period such as the one published by Al-Thawri newspaper, the mouthpiece of the Yemeni Socialist Party, on September 27, 2007. Therein, she called for a popular peaceful uprising throughout Yemen to overthrow the then existing regime to be replaced by a full democratic system.

“In normal circumstances, it may be hard to find an activist who does not engage in or interact with politics. But in difficult circumstances of some countries, such as Yemen, which witnessed a popular youth revolution in 2011, followed by a political movement followed by a counter revolution and several internal and external wars, it is very difficult for an activist to remain away from politics.

Many activists have been involved in politics in the hope of bringing about a change in existing policies, but I do not know if they have succeeded in doing so. The problem lies in regimes, which deal with different issues in their own way.

On the personal level, I have not yet decided to engage directly in politics. All I do is criticize and oppose the wrong policies from my own perspective as a human rights activist and defender.”

Bold and outspoken, Karman has been imprisoned on numerous occasions for her pro-democracy and pro-human rights protests. Among Yemen’s youth movement, she is known as “mother of the revolution”, “the iron woman”, and “the lady of the Arab spring”.

She has organized and participated in countless activities and written articles, calling for abandonment of despotism, extremism, violence and terrorism, for dialogues between religions and sects and for co-existence between peoples, cultures and civilizations.

“Tawakkol Karman is a young Yemeni woman who is a very strong defender of human rights inside and outside her own country. She always tells the truth despotic regimes do not like to hear.
I practiced journalism, and I realized early on the importance of press freedom to make journalism play its role in disseminating information to the public and monitoring the performance of the authority. I founded NGO “Women Journalists Without Chains” that dedicated to defending media outlets and journalists and demanding the repeal of anti-freedom laws, training and qualifying journalists and human rights activists to do their jobs properly.
In everything I do, I always make sure that I am the voice of freedom and the voice of the people, and therefore I oppose any governmental or non-governmental policy that does not care about interests and dignity of people. I have a dream of ending injustice everywhere, I feel sympathy for all the oppressed on this planet.”

Since as early as 2007, the longtime activist for human rights and freedom of expression had been able to organize hundreds of protests, sit-ins and solidarity events, as well as campaigned for women’s rights and ending harassment of journalists. All of this became a source of inspiration for citizens to reject injustice and show solidarity without fear of influential and the security services.

“Journalists in the Arab region go through the most difficult times, as repressive regimes carry out arrests among them and enact laws and legislation to restrict their freedoms and independence.
I believe it is not possible for a free press to be there in dictatorial countries. In case we are to overcome the obstacles journalists face, we must first overthrow tyranny and its laws.
I would like to point to the double suffering of Arab journalist as both authoritarian governments and terrorist groups do not accept the role of the press.”

On the question what motivates her to keep going with her endeavor, Karman answered:

“I am motivated by believing that I have to play a role, which is to combat tyranny and to establish tolerant societies that enjoy freedom and justice.

Our people do not deserve to live under this injustice. We have to believe in ourselves and in our ability to overcome this difficult stage.”

Given her prominent role in leading and calling for Yemen’s revolution, she was dubbed the mother of the revolution but also the lady of the Arab Spring especially after she was rewarded the Nobel Prize in 2011. Karman has been seen as an Arab icon for her defense of the values highly admired by the Arab Spring and for her contribution to combating autocracy. On the other hand, she was met with the hostility by the regime that resorted to conducting a series of smear campaigns against her. Moreover, she has become a target of the counterrevolutions and the military coups that have taken place in the countries of the Arab spring.

“At every stage, I had different challenges, and I often overcame them. But some challenges last for a long time, and each of us should care about. The persistence of political tyranny, religious extremism and the West’s double standards towards Arab and Islamic issues are among the most difficult challenges, as they perpetuate injustice and violence and contribute to spreading hatred among peoples.

Personally, I face challenges every day, but I do my utmost to overcome them. I do not believe there is anything impossible.”

Despite the fact that the society in Yemen is conservative, she was able to convey a message that a woman could be a leader and decision maker through her insistence on continuing and leading peaceful protest movements. After years of daily and weekly sit-ins and protests led by Karman, WJWC’s activists and other activists of civil issues and human rights, millions of women took to the street to demand human rights and anti-corruption and call for the regime’s fall.

“I want people to remember me as one of them, my case is their cause, I have never surrendered, nor have I compromised principles. I always demand freedom and dignity for all.

My cause is to fight for everyone’s freedom in this world, especially the Arab region, which is experiencing a great struggle between the revolution and the counter-revolution. We can maintain our cause by insisting on achieving our goals no matter what the odds, as well as by working to entice the world to our just causes. In this context, I hope that the threat posed by tyranny to international peace and security through war, terrorism, armed groups, corruption and organized crime is clear to the world.”