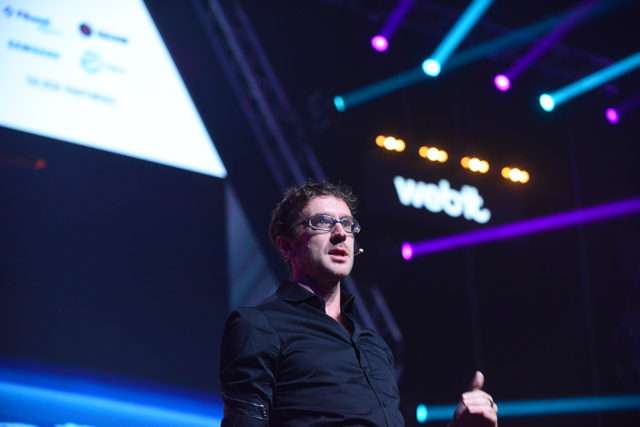 Pablos Holman (a World-renowned Hacker, Inventor, Technology Futurist) joined Webit.Festival Europe this year. He works at the Intellectual Ventures Laboratory (IVL) where a wide variety of futuristic invention projects are under way.

There were not many humans for like thousands and thousands of years until about 200 000 years ago when we hit the hockey stick growing curve.

We went from millions to billions almost overnight

It’s that curve that defines everything we are experiencing today.
How do you keep 7B people alive without additional planet?

We solved hard technical problems that kept humans from thriving

Every single time we invented new technology and brought it to the world to solve those problems. It wasn’t government policy, it wasn’t religion.. it was new technology.

“Our job is to figure out how are we going to invent on that scale. Because if there is one thing all these extra humans are good for – it’s making more problems!”

Intellectual Ventures Lab invented a system for reversing some of the effects of global warming.

It isn’t a solution to Global Warming, but plan A is to stop emitting greenhouse gases – we are not doing that…This plan is: Maybe we could put a little bit of particulate in the stratosphere, little white dust that reflects like 1% of the sunlight. before it gets to earth’s atmosphere, before it heats up greenhouse gasses. It’s like a sunblock for the earth. It could bring Earth’s temperature down by 1 or 2 degrees. Just enough to restore arctic ice caps to pre-industrial levels. There are things we can do to buy time.

They also invented antenna technology which is using meta-materials – a new area in science – materials that don’t exist in nature but which we can manufacture to give us cool new superpowers. This antenna has no moving parts but it can electronically steer a beam. So it can aim a beam at a satellite.

“We have these things in the roofs of cars – driving all the way across America – coast to coast, streaming 4k video of the satellite both directions, uncompressed.”

Every new satellite we put up these days has more wireless communication capacity than the entire satellite network had 5 years ago.

“At the intellectual ventures Lab we bought one of every tool in the world and we hired one of every kind of scientist and we put them all in the same team and we started trying to invent for the biggest problems that we can find. We don’t make any products, we just invent new technologies.”

We need to do this kind of work and we need to do it in a large scale. If you are lone scientist in a garage you only get a couple of inventions a year.

If you have a soup can full of depleted uranium, there’s as much energy there as 12M USD of Gas

But, you know, it’s radioactive, and dangerous and makes a lot of nuclear waste which we just stockpile into the horizon and we like saving it for our grand kids cause we don’t know what to do with it.

“We invented a new type of nuclear reactor that is powered by nuclear waste.”

What a lot of people don’t realize is today’s reactors were invented before we were born. They have problems and we can do better than this. IVL design their reactors on a giant supercomputer they can model every neutron and understand what’s going to happen before they build it and can make modern safe reactors.

“We solve Energy, we solve a lot of other problems for free.”

These are the logical extensions to what you get when you invent internet, mobile phones, wireless data. But something important is happening. These are very successful products and very successful businesses.

When you look at the economic value in the world when we were kids it was in energy companies, oil companies, biggest companies in the world. Now? It is in Tech companies.

Think about how your clothes are made. They grow cotton in one country, ship it to another country to be beaten down, bleached out. Ship it to another country to be spun into yarn, ship somewhere else to be made into fabrics, just before the shipping to somewhere else to be cut and sewn into t-shirt and then back to Europe, where you wear it 3 times, throw it to the bottom of your closet and that is 4 euros. Think we can do better?

This industry has been avoiding technology and innovation for about a 100 years.

We pretend you are a unique and special snowflake but you are really a small, medium or large snowflake.

We make t-shirts for the winning team and the losing team. Sell half of them and send the other half to South Africa and write it off as a charitable donation. We are guessing what’s going to sell, what colors what designs, what sizes.

Think about how we made software in the 80s. We made software on an 18 month development cycle the same way we make shoes and cars and sunglasses. But we don’t anymore.

Here’s how it it today: I dream something up, I roll out of bed, I code and I launch it by lunchtime. All afternoon people are emailing me pissed off “doesn’t work on android phone“. I fix some bugs and go to dinner, fix some bugs, go to bed. We don’t need to guess a year in advance what the market wants.

“If we can make self driving cars and make surgical robots, how long you think it will be before a self running sewing machine exists?”

When it does, the entire industry will be re architected in a way that they can’t see coming. Two trillion dollar industry, every human being is a customer. This is a road map for disruption.