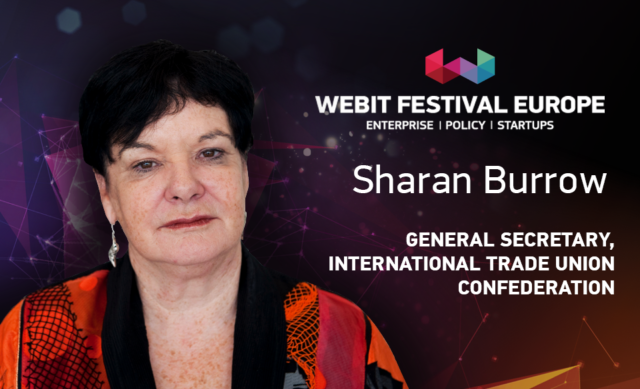 The General Secretary of the International Trade Union Confederation joins Webit to discuss how to re:Invent Europe’s Future!

Burrow underlines the necessity of female participation in organized labour

Sharan is well known for her international advocacy on labour standards, corporate responsibility, climate change, investment in infrastructure and the green economy, investment in the care economy, women, equality and diversity, global migration and employment.

“I am a warrior for women and we still have work to ensure the inclusion of women in the work place and in our unions. The struggles for women are multiple – too often within their families for independence, then in the workplace for rights and equal opportunity, in their unions for access and representation and then as union leaders. But the investment in and participation of women is not only a moral mandate it is an investment in democracy and a bulwark against fundamentalism and oppression. Organizing women is and must continue to be a priority for the ITUC.”

She has represented workers and civil society groups in global policy discussions in United Nations bodies, including ECOSOC (United Nations Economic and Social Council), on the Governing Body of the International Labour Organization as well as at the G20, World Bank and International Monetary Fund.

The world of work has to refocus on the fundamentals

Burrow is one of the B Team leaders, a commissioner on the Global Commission on Business and Sustainable Development and the New Climate Economy Global Commission on the Economy and Climate. She was a Co-Chair of the World Economic Forum Annual Meeting in Davos for 2015, 2016 and also joined this year’s all-women co-chair team.

The ITUC is a supporter of the UN Principles for Responsible Investment (UN PRI). Under Sharan’s leadership the ITUC’s Workers’ Capital Committee has been strengthened. More than US$ 13 trillion of retirement funds are under joint trustee management and the ITUC and its affiliates are active in both trustee education, corporate governance and shareholder activism.

“We have a vital role to play to protect jobs in existing workplaces and industries by demanding and bargaining for industrial transformation, to organize new quality jobs in the emerging green economy and to fight for the ’Just Transition’ measures that ensure we leave no one behind. This means work for our pension funds too. It means investing for the long term.”

Here you can see a full list of the confirmed speakers at Webit.Festival Europe 2018, while here you can get all the information you need about the tickets for the event.