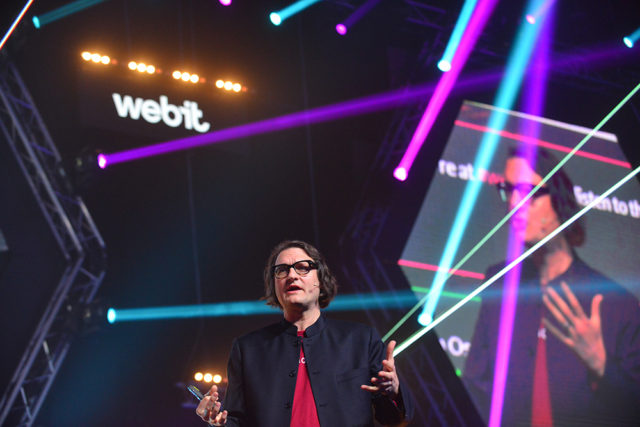 Robert C. Wolcott is a long time friend of Webit.Festival. He is a Clinical professor of Innovation & Entrepreneurship at the Kellogg School of Management, Northwestern University and Managing Partner at Clareo.

The human experience will change more in the next century than it has in the last ten millennia: Where is the discussion to accompany that change?

Mr. Wolcott returned to Sofia once again for the 10th anniversary edition of the Festival and wowed the audience with his keynote with special topic “Innovating your life”. He started with a quote from the one and only Steve Jobs:

“Innovation distinguishes the leaders from the followers.”

If your aspiration is to be a leader, to make mark, to create a legacy in some way than it’s going to require doing something different. If you don’t you’re doing the same thing that everybody else already did. And how would that distinguish you?

In Robert’s opinion over the next 100 years the human experience will change more than it has in the past 10 000! We will be able to solve challenges that have been intractable for centuries but we will also create threads, some of which humanity has never seen before. But unfortunately our public dialog just isn’t up to the task.

On the one hand we hear ”The robots will steal our jobs and then kill us all in some kind of impending robot apocalypse”. But on the other some people are espousing a coming technology infused nirvana. Clearly the truth is somewhere in the vast between and it’s our responsibility to explore it for ourselves.

The professor broke down the immense and complicated process of “innovating our life” in 5 simple steps:

When we stay focused on our dreams and give them new names like GOALS of MISSIONS they automatically become more realistic and more achievable.

2. Ask better questions. We only see the things which we are looking for.

We start asking questions, we start looking for new things, for new clues. Clues that will help us get to the next step, but some of them will inevitably mislead us and we will make mistakes. Then comes the next lesson.

3. Seek wisdom in mistakes. The very first reaction when something goes wrong is that we are trying to hide it.

The problem is when something doesn’t go the way you expect it perhaps there’s a problem with the way you see the world.
Back in the late 19th century two researchers named Michelson and Morley did one of the most famous failed experiment in history. They were attempting to prove the existence of the “luminiferous aether”. It was the dominant hypothesis of physics in the 19th century to explain the following phenomenon.

The scientists did their experiment and when it failed, they couldn’t figure out why. They changed the method, tried again, then other scientists tried again but it kept failing and nobody could figure out why.
Then came Einstein who said: “Perhaps there’s no problem with the experiment, perhaps there’s a problem with the way we see the Universe.”
So when something doesn’t go the way you expect it, you should step back and do an after action review: Why that did not work? What can we learn from it?

4. Create option paths. Yes, options come at a cost, but create some.

“As we each create our own paths, we together create the future.” – says Mr. Wolcott – and he also adds the question to the public – “On which paths are you … and why?”

5. Above all seek meaning. Human beings grow through challenges.

The question for each of us is, as lifespans increase up to even beyond a 100 years, as we encounter the remainder of 21st century, we will all be faced with the question: how should we use this time?”