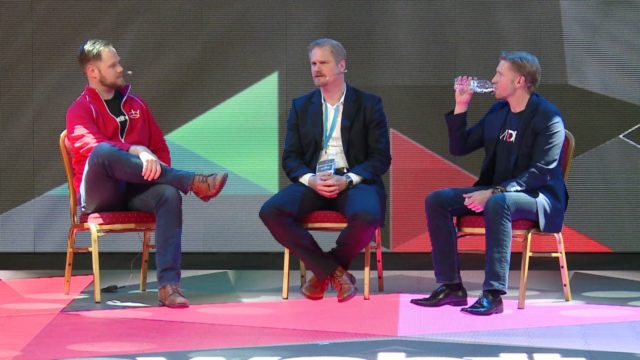 Apply for our Founders Games and get the chance of being among the 200 startups presenting their innovative idea in front of investors, business leaders and all attendees of Webit.Festival 2018.

Corporates & startups. Two forces of the business world which are as much different as they need each other. Brian Collins (AngelHack), Jonas Jacobi (IBM) & Matthias Schanze (Siemens) put some light on this complex relationship Mr. Schanze described as”Dancing with an elephant”

That revolution was built on the idea that corporates could start opening up their technology for developers & startups. By doing so they were able to find a whole new strategy. In that way, the strategy shifted. It shifted from a B2B or a B2C focus to a Business to Developer focus. As such, innovation programming quickly went on the rise. Corporates began looking at developers and startups as a whole new strategy to their strategic plans and in doing so they’ve started working and finding ways to engage with startups & developers at an earlier and earlier stage.

Why the relationship between startups & corporates is important

Big companies have more than enough funds to put in place and do their own research. What these companies have noted is that a lot of innovation occurs outside the company itself. That’s one of the main reasons companies like IBM, Siemens and others of this size have been involved in the startup ecosystem for quite some time already. Startups do set trends and it’s important for large corporations to always keep an eye on new trends and new technologies that are emerging fast.

So what are these companies looking for? Big ideas. Great technologies. And innovations. Innovations that disrupt industries and possibly create new markets. Transformation, not only for the company itself but for its clients as well.

Value proposition to the corporates

Corporates are well aware that they cannot invent everything by themselves. Co-creation and co-innovation with startups is a key point of their development. The transition is turning from internal Research & Development departments inside of corporates towards creating an external community, a liquid R&D force in essence. There’s the notion that most big corporates engage with, acquire or invest their funds in startups that already make some millions of revenue but in reality that is not the case anymore. The practice of an early engagement has grown immensely and that calls for more fair chances for more startups.